Fraudsters are preying on the goodwill of people everywhere by using the tragic fire of Notre Dame to their advantage.

According to research by security company ZeroFOX, cyber-criminals are “spreading misinformation about the disaster,” which includes fake donation pages and launching new phishing campaigns. The company says in a blog post that “preying on the sympathy of those wanting to help victims is nothing new, but the technical underpinnings of the internet and its social media platforms allow hackers and spammers to scale their efforts at an unprecedented rate.”

The blog goes onto explain that these threat actors use a variety of tactics, such as:

Most worryingly, the crowdfunding tactics might work more than anything else. There is a rise of raising money this way for help people in need, especially around tragic events such as this. Sites such as JustGiving might be copied to set up fake donation sites. “People looking to donate quickly may easily mistake a fraudulent donation page for the real page – losing their money and putting money in the hands of bad actors, not those in need,” says the blog post.

One example the ZeroFox Alpha Team found was on justgiving.com, where an anonymous user created this crowdfunding campaign supporting “Friends of Notre-Dame De Paris Inc.” “Based on the information provided (and lack of details) in the post, any supporter should be hesitant to donate to this particular fundraising effort,” the post goes on to say.

“In the case of the Notre Dame disaster, we have seen multiple instances of posters using the hashtag #NotreDameCathedralFire looking to capitalize on the tragedy,” explains the post.

“[This example of one such post] is looking to sell ‘services’ using the Notre Dame fire hashtag.” Users need to be be careful, it goes on, of any seller using hijacked hashtags, as they are “typically associated with scams and malicious links.” 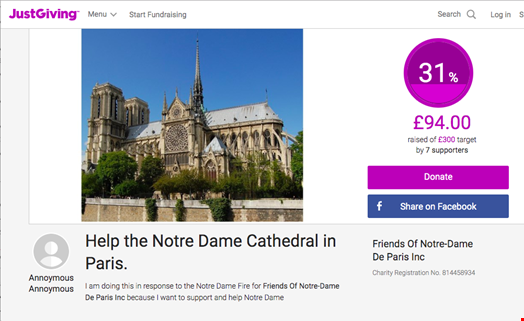 When it comes to avoiding scams related to this disaster, ZeroFOX recommends the following: