Recently, NSA, along with FBI, has revealed a Russian APT28 Linux malware named “Drovorub.” The experts asserted that this malware is managed by the Russian hackers, and the main motive of this malware was to plant backdoors inside hacked networks.

The threat actors named the group “Fancy Bear,” and it takes advantage of various functions accessible to Linux Kernels.

“Drovorub” is a ‘swiss-army-knife’ that enables the threat actors to execute several functions, like Stealing files and remotely control the victim’s computer.

The “Drovorub” malware is consist of four tools that are turned into one specific thing; in short, Drovorub is a malware series that has four elements, and here they are:-

“APT Hackers behind this malware has implemented a various evasion techniques from userspace, including specified files and directories, processes and evidence of those processes within th “/proc” filesystem, network ports and sessions, and specified loaded kernel modules, to include itself.” NSA said.

It utilizes a MySQL database to handle joining agents and clients, as well as it also controls the authentication, tasking, and enrollment of all new agents and clients. Once it gets installed in the server, the client or the victim obtains commands from the server. 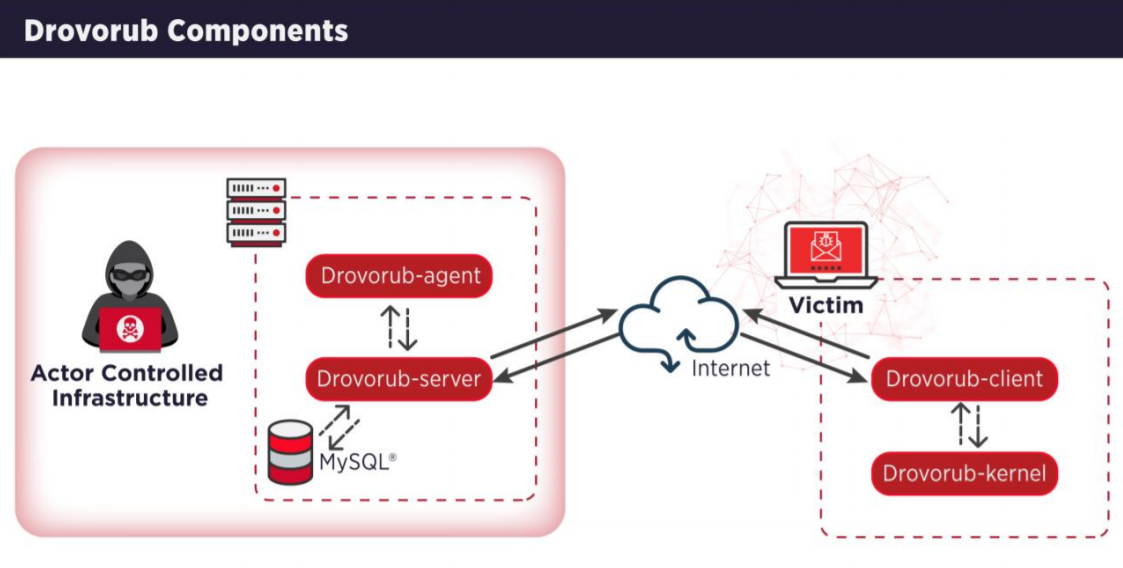 It enables the files to be transferred between the threat actors and the victim. This malware also has some extra set of capabilities like the port forwarding and remote ROOT shells.

The key function of this malware is that it controls the hiding of the client, and then it processes files and network ports from the user-space. It happens because the client is packed with the kernel module to implement hiding abilities to both.

Moreover, unless the UEFI secure boot is enabled in Full or Thorough mode, this malware remains hidden in the infected systems and survives reboots, as it has a high skill set.

The experts justified that Drovorub malware mainly has four elements that are rolled into one specific thing, as you can see in the above image, the component, and their function.

The security experts at NSA have affirmed that they are investigating the whole matter. But, until and unless it won’t get fixed, they have recommended users to follow and implement the mitigations they offered as the mitigations are intended to stop Drovorub’s resolution.

Both, NSA, and FBI are trying their best to determine this Linux malware, and they have confirmed that they would soon fix this issue, till then they strongly recommended the users to follow the mitigation properly.